Constructs of Architecture and Fiction

September 8, 2010 Comments Off on Constructs of Architecture and Fiction

“That is how it begins. The place is New York, the time is present, and neither one will ever change.” 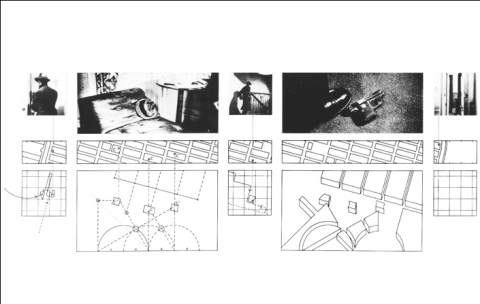 The architect uses projection as well as representational tools to construct new tangible realities. Fiction writers work in a similar way, constructing worlds, spaces and characters through text. Both architects and writers construct places through their mediums to make manifest their ideas. This year Unit 10 will explore the relationship between constructed narratives and architecture

as well as the tools of the architect to generate fictional narratives of the city.

Many fictions have had direct influence over architecture, such as Invisible cities by Italo Calvino, La vie mode d’emploi by Georges Perec, The name of the rose by Umberto Eco and the work of JG Ballard. Architects have looked to literature to help formulate new architectural potentials; Bernard Tschumi used James Joyce’s Finnegan’s Wake as a starting point for his seminal work Joyce’s Garden and Peter Eisenman used spatial and temporal relationships in Shakespeare’s Romeo and Juliet to develop a new urban logic for the city of Verona.

Unit 10 will explore the relationship between architecture and fiction through focusing on the work of the writer Paul Auster and in particular his novel The New York Trilogy.  Using this text as an example, students will indulge in the novels idiosyncratic narrative structure, complex form and collaged style to develop multiple and unusual potentials for individual architectural speculations and constructions.

The Detective Novel and The Construction of Identities.

In choosing The New York Trilogy as a point of departure we will be using Paul Auster’s obsessions in regard to how he sees the experience of inhabiting the city of New York.  In particular we will look at how he utilises the detective story as a framework, which he manipulates to describe and question ‘urban relationships’. The detective story is a means to the end of looking, observing, following, recording, and tracing the lives and habits of characters in the city.  We will seek to make use of the peculiar relationships the various characters entertain within and across the trilogy, the role reversals leading to ambiguous situations will enable us to explore ideas of identity and authorship. In utilising these ideas we will seek to uncover new processes of design as well as question the role of the user in the occupation and creation of architecture.

Site and Program – New York and a Hotel Retreat

Following in the steps of Auster the focus for the unit projections and observations will be the city of New York. Located in the west of Manhattan we will concentrate our investigations in Chelsea, a point of interest in Auster’s book.  Our site is located by 11th Avenue and adjacent to the now decommissioned and re-appropriated High Line.  Situated on the fringes of Manhattan close to the Hudson River bank it could be seen as a place of refuge but also of observation. Inhabiting this site we will ask students to propose a new model hotel or urban retreat.

PART ONE _ TERM ONE: OBSERVATION AND INVESTIGATION

We will start the year with a series of short projects based on the ‘Ghosts’ short story from the New York Trilogy.  As part of these projects students will be asked to engage in techniques of role play, city mapping, and voyeurism.

Students will be asked to develop characters that may either be familiar to them or totally unknown. They will experience the phenomena of being followed as well as following. Videos, Maps, Photographs and notes will be collected in order to reconstruct this narrative. They will record and present their experiments both through narrative and graphically.

“Everything has been arranged, White says. There’s a small apartment directly across the street from Black’s. I’ve already rented it, and you can move in there today.”
Paul Auster, The New York Trilogy,  (Ghosts) 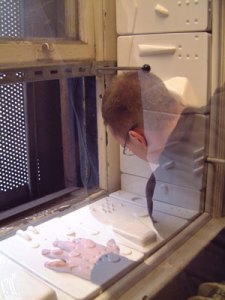 Operating as an interface between private and public space the common architectural component of the window is often taken for granted. Students will be asked to challenge our understanding of this architectural element, and its relation to the inside and the outside of a building, by designing a new and imaginative window space. They will be asked to choose an existing window from which to look out/in and build a three-dimensional project, where some objects from their previous errands might be collected and assembled.

As in the book, whilst these investigations are to be undertaken separately, they will entertain links by way of repetitions, relocation and re-interpretation in a different context, from that of the city to that of the more immediate space of the window.

“The address is unimportant. But let’s say it’s Brooklyn Heights, for the sake of argument. Some quiet, rarely traveled street not far from the bridge. – Orange Street perhaps.”
Paul Auster, The New York Trilogy,  (Ghosts)

Although Paul Auster states in one of his stories that ‘The address is unimportant’, he goes on to give us the name of the neighborhood, the street and floor number. What is important however, is to know that the street is quiet, rarely traveled and not far from Brooklyn Bridge. Each one of these details happens to enable subsequent events in the story.

The Unit will travel to New York early November (early planning of this trip will be essential).
Site of the New York Trilogy, the city will now become the site of the Unit’s main project.
Walking The High Line as well as along 11th avenue, students will be asked to record carefully and indulge themselves into a sense of the city. Using photography, video, audio, drawings, and performances students will be asked to map, record and observe individual interpretations of the unit’s immediate site as well as the wider locale of the area of Chelsea.  These observations are then to return to England to form the starting point for students individual design agendas and propositions

Back in London, students will collect together their recordings, develop their narrative, elaborate their programs and propose their individual architectures for a hotel or urban retreat.

This hotel is to take inspiration from the programmatic system of the legendary Chelsea Hotel located further in to the center of Manhattan from our site, on 23rd street. Hotel, Hostel, artists retreat, site specific art gallery, production space, muse, semi private and semi public the Chelsea Hotel is ingrained within the mythologies of the City.  Its inhabitants and guests included William Burroughs, Dylan Thomas,  Arthur C Clark, Bob Dylan as well as numerous members of Warhol’s Factory. Using this existing building as a generative tool, as well as individual readings and interpretations of the New York Trilogy, students will generate designs for a new model of dwelling within the city. An imaginative and contemporary form of dwelling that allows its occupants, as well as visitors, to experience a building that operates between the spaces of fiction and architecture, the real and the imagined.